Frederick Chapman was Palaeontologist to the National Museum, Melbourne from 1902-1927 and served as the first Commonwealth Palaeontologist 1927-1935. He trained as a teacher of geology and physiography at the Royal College of Science, London and was Assistant to Professor J.W. Judd in the geology department of the College from 1881. His research interest was in Foraminifera and he became a world leader in this field. His books included The Foraminifera: an introduction to the study of the Protozoa (1902) and Australasian fossils (1914). On being appointed Palaeontologist of the National Museum of Victoria in 1902 Chapman had the task of amalgamating and arranging the collections of fossils from the Geological Survey of Victoria and the University of Melbourne. As the first Commonwealth Palaeontologist his work involved the examination of fossils from bore material submitted in the search for oil. Chapman took a leading role in scientific organisations in Victoria, serving terms as President several societies and Honorary curator of the Maranoa Gardens in the Melbourne suburb of Balwyn. 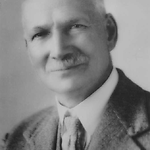