John Anderson was Professor of Inorganic Chemistry, Oxford University, 1963-1975, following two periods at the University of Melbourne, first as Senior Lecturer and then as Professor, which alternated with positions in the UK. 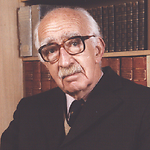