Henry Hunt was the first Commonwealth Meteorologist of the Bureau of Meteorology (1907-1931), and co-authored, along with E.T. Quayle and T. Griffith Taylor, the first text-book on Australian meteorology, Climate and Weather of Australia, 1913.

Hunt began his meteorological career as an assistant to H. C. Russell in Sydney. He had already won an international prize for his work on the Southerly Buster when appointed as Australia's first Commonwealth Meteorologist in 1907. He was immediately despatched on a world trip to assess the latest developments in meteorology. Although he provided outstanding scientific leadership to the early Bureau, he fought a long and difficult battle through the period of the First World War and the Great Depression to obtain the resources needed to build the networks and scientific basis for Australia's meteorological services. A Hundred Years of Science and Service, Bureau of Meteorology, 2001. 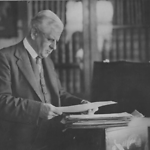