Arthur Turner was the Officer-in-Charge of the Animal Health Research Laboratory, CSIR/O Division of Animal Health and Nutrition (later Production), Parkville 1936-1954, he was then Assistant Chief of the Division until 1960. The work he and his collaborators undertook on Contagious Bovine Pleuropneumonia (CBPP) established confidence in the complement fixation test for diagnosis and identified the value of vaccination and its occasional shortcomings. The work was the basis of a national eradication campaign leading to Australia being declared officially free of CBPP in 1973. 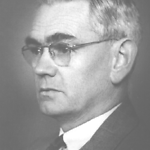