Alfred Ewart was the first Professor of Botany, University of Melbourne 1906-1937 and until February 1921 was also the Victorian Government Botanist. Although trained in England, he published widely on Australian flora and travelled extensively throughout the country. President of the Royal Society of Victoria 1920-1921. 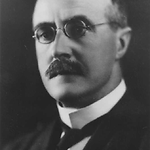