Crosbie Morrison became Australia's best known naturalist during the 1940s and 1950s. He was the editor of Wild Life from 1938-1954 and broadcast regular weekly nature talks from 1938 until his death.

Philip Morrison was educated at The University of Melbourne attaining a Masters of Science (MSc) in 1926. He went on to communicate science and participate in scientific expeditions and studies. As a Science communicator Philip Morrison edited the periodical Wild Life, was a special writer for the Melbourne News Paper The Argus and wrote the book Melbourne's Garden first published in 1946. In addition of his written contributions Morrison also produced weekly nature talks broadcast throughout Australia and New Zealand and presented lecturers on natural history at The University of Melbourne Extension Board (later known as the Council of Adult Education).

His scientific expeditions and studies included the Great Barrier Reef Committee's 1925 work, the first Mackay aerial survey of central Australia in 1930 and a later trip across the Nullarbor with Sir Russell Grimwade. 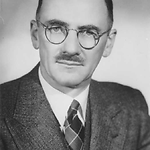