Edgar King was Professor of Pathology at the University of Melbourne from 1951 until his death in 1966. His enduring contribution to medical science was in the application of general biological principles to the study of pathology, in particular ovarian tumours, certain chronic diseases of the gall bladder, and tumours of the bone and synovial membranes. He was appointed a Fellow of the Australian Academy of Science (FAA) in 1954. 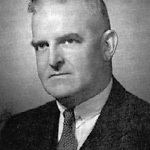