Hugh Ennor was Secretary of the Commonwealth Department of Education and Science 1967-1973. Earlier he was Professor of Biochemistry 1948-1967, Deputy Vice-Chancellor and Dean of the John Curtin School of Medical Research, Australian National University, Canberra. In 1954 he was elected a Fellow of the Australian Academy of Science (FAA). 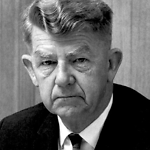