Olive Anstey was a staunch advocate for better working conditions and pay for nurses. She worked on various committees with the goal of obtaining recognition of nursing as a profession.

For Olive Anstey, improving conditions for nurses were synonymous with improving care for patients. This conviction guided her extra curricular activities all her professional life and career. She recognised early in her career that the way forward for nurses was through their nursing organisations. Miss Anstey joined a union in 1944 as a student nurse and was encouraged by practice and example by the Matron of the hospital at this time to be active in nursing organisations to bring about changes. As a student she led her fellow student nurses in the cause of improved pay and conditions, issues that were resolved in the Western Australian Nurses Arbitration Award handed down in 1946. Industrial experience as a registered nurse was gained from her position as an Organiser for the New South Wales Nurses Association where she took an active role in dispute resolution and learned to develop strategies to achieve aims.

Miss Anstey's vision of nursing included the idea that nurses could position themselves to contribute to the alleviation of the social conditions that marred the lives of many. Her strongly held convictions about nursing were tempered by a capacity to see clearly what needed to be done and to be realistic in what could be achieved within the prevailing circumstances. She was, therefore, always an active participant in the organisations in which she involved herself, holding office in many. She believed that the development of nursing could only come about by the efforts of nurses themselves and in this, the nursing organisations had a critical role to play. She worked towards unity and cohesion within the nursing profession, between its organisations, both nationally and internationally, seeing disunity as a major weakness that diminished the power of nurses to express, pursue and achieve their professional aims.

In keeping with the notion that nurses must help themselves she was an early member of the Florence Nightingale Committee which was dedicated to raising funds to support scholarships for nurses to undertake post basic education. She was an advocate for improved education and the formal development of nursing knowledge through research. She foresaw and indeed advocated the transfer of nursing education to the tertiary sector and was active in promoting and supporting this idea as early as the 1970s. She worked towards this goal through the Royal Australian Nursing Federation in particular.

She carried a strong conviction into the role of President of the International Council of Nurses (ICN) believing that the collective force of nursing was a benefit to mankind which could be mobilised to bring about 'an end to violence and starvation'. Miss Anstey became the first Australian born president of the ICN. She was outspoken and fearless in relation to issues that were of concern and she was highly respected for her integrity, enthusiasm and optimism as well as her absolute belief in both nurses and nursing.

Those who knew her believe that her political awareness, savvy and being administratively adroit, particularly in managing meetings and in understanding money matters contributed to her success in achieving her aims through the nursing organisations. She was well regarded by her colleagues and subordinates who appreciated her openness and preparedness to listen to people. She made a point of knowing everyone and keeping in touch with nursing practice issues within her own hospital which was much appreciated by all with whom she worked.

Throughout her career she was a staunch advocate for nurses and nursing and she worked tirelessly to "improve [patient] care and to improve the lot of those who cared" (Pratt, R. & Russell, R.L. (2002). A Voice to be Heard: The History of the NSW College Nursing. Allen & Unwin, Sydney p.196). 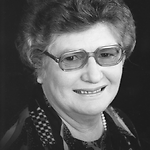