Alan R. Hickinbotham joined the staff of Roseworthy Agricultural College in 1929 where he lectured in Chemistry and Physics and carried out research into wine-making under Australian conditions. He also helped established the highly regarded Diploma Course in Oenology which began in 1936. Hickinbotham and his students made some major contributions to oenology and his Seasonal and Winemaking Notes were published regularly for years in the industry trade journal, The Australian Wine Brewing and Spirit Review. One of his students was Arthur Ray Beckwith who went on to discover the importance of pH in wine production. Alan Hickinbotham remained at Roseworthy College until1948. In 1992 the College was absorbed into the University of Adelaide, and the grape and wine courses were transferred to the Waite campus, where the prestigious Hickinbotham-Roseworthy Wine Science Laboratory was established in his honour. 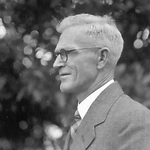