Colin Brady worked as a protein biochemist for the CSIRO in the Division of Food Research and Division of Horticulture, and was instrumental in the development and commercial release of genetically modified tomatoes in the United States and United Kingdom.

Colin was a meticulous worker and a perfectionist in his science. One of his great gifts was his ability to generate this urge, together with the enthusiasm to get it right, in all his colleagues. Jim Speirs, CSIRO, 2000. 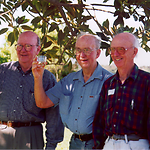