Herbert Bolotin was Emeritus Professor of Physics at the University of Melbourne, where he received a Doctor of Science (DSc). Bolton was also a Foundation Fellow of the Royal Society of Victoria (1995) and its President from 1997-1998. Prior to settling in Australia in 1971 he completed a BSc (CUNY) and a BSc, MSc, PhD (Indianna). 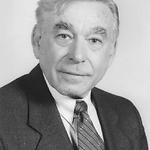