Lionel Stubbs was Professor of Plant Pathology at the University of Melbourne from 1969 until he retired in 1981. Previously he worked at the Victorian Department of Agriculture at the Plant Research Institute in Burnley. In 1955 he received a Harkness Fellowship after completing his studies at the University of Melbourne (BAgSc, MAgSc, DAgSc). He was President of the Royal Society of Victoria 1979-1980. 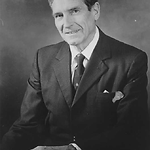