Redmond Barry was First Puisne Judge of the Supreme Court of Victoria and inaugural president, Victorian Institute for the Advancement of Science, 1854.

President, Victorian Institute for the Advancement of Science, 1854; vice-president of the Philosophical Institute of Victoria, 1855. These institutions were the forerunners of the Royal Society of Victoria. 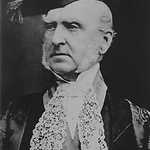