Maurice Mawby was an expert in mining and metals treatment. He held many appointments including technical secretary (1941-1944) of the Commonwealth Copper and Bauxite Committee (Australia); manager of New Broken Hill (1944) where he was chief metallurgist; director of research and development with Broken Hill Associated Smelters Pty Ltd (from 1945) and director of exploration and research at Zinc Corporation. 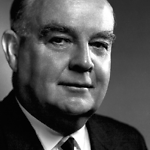