John Shephard made a micro-ruling engine for test rulings in about 1893. The only surviving rest ruling has a series of bands whose resolution goes down to one half of a micron. He was interested in microscopy and established a reputation in microscopy circles in Melbourne for which he was long remembered. Shephard was initially an apprentice then fitter with Guest & Chrimes Ltd in Rotherham, Yorkshire UK, 1863-1883). After arriving in Australia he set up Davies, Shephard & Co. - an engineering and brass founders firm in Melbourne (1884-). Shephard was a one-time President of the Royal Society of Victoria from 1912 to 1913. 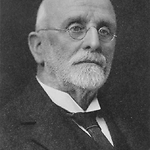