James Kershaw joined the National Museum, Melbourne in 1883 as an assistant taxidermist to his father William Kershaw. Over the next 48 years James Kershaw rose through the ranks to become museum Director (1929). Although Kershaw officially retired in 1931, he was appointed the museum's first honorary curator of Zoology. James Kershaw joined the Royal Society of Victoria in 1900 and held many positions within the Society. He was President from 1918-1919. 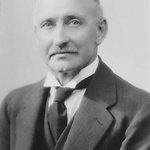