Edward Dunn was Victorian Government Geologist from 1904 to 1912. He qualified as a geologist while working for the Survey in the 1860s, but after it was abolished he spent most of the next 15 years working in South Africa. He became Geologist to the Cape town Administration. Much of his work was concerned with gold, coal and diamond deposits, glaciated landscapes and geological mapping. In 1886 Dunn returned to Australia and was in practice as a geological consultant, working with Broken Hill and Mount Morgan, and investigating the Gippsland coalfields and Bendigo goldfield. As Government Geologist he published a series of significant reports on Victorian geology and gold deposits, established a geological museum and mining laboratory, and discovered the Powlett coalfields. After retiring from the Survey Dunn returned to private consulting and writing. He was President of the Royal Society of Victoria in 1906. 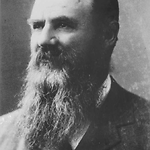