John Davis was Chief Officer on the "Nimrod" during Shackleton's Antarctic expedition in 1909 and Master on the "Aurora" and second in command of the Australian Antarctic Expedition 1911-1914. He later became Commonwealth Director of Navigation 1920-1949. President of the Royal Society of Victoria 1945-1946. 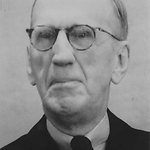