Robert Walsh was Dean of the Faculty of Medicine, University of New South Wales 1973-1982 and Visiting Professor of Human Genetics from 1962 and Professor 1967-1982. Earlier he was founder and Director of the New South Wales Red Cross Blood Transfusion Service from 1946. 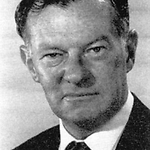