Nancye Perry, an entomologist, worked at a number of institutes including the CSIRO (Commonwealth Scientific and Industrial Research Organisation), Walter and Eliza Hall Institute of Medical Research and the Commonwealth Department of Health Plant Quarantine Division. Prior to her Australian posts, Perry worked in the UK for almost four years with the Department of Scientific and Industrial Research's Forest Products Research Laboratory. In 1957 she married and was forced to resign from her Health Department post as at the time married women were not allowed to work for the Australian Government. This is when Perry moved her attention to painting and the arts.

While undertaking a Bachelor of Science Degree at the University of Sydney, World War II broke out so Nancye Perry's studies were interrupted: she deferred her studies for over a year to work at the CSIR (Council for Scientific and Industrial Research) National Standard Laboratory. Perry eventually graduated in 1945, but as opportunities for female entomologists in Australia were very limited she was forced to go abroad. She moved to the UK in 1946 where she worked as a timber entomologist at the Department of Scientific and Industrial Research's Forest Products Research Laboratory in Buckinghamshire (1946-1950). Family pressure made Perry return to Australia in August 1950 where she was only able to find temporary appointments. Her first post was with the CSIRO (1950-1951) where she worked on the Sirex woodwasp - a dangerous pest that was being brought to Australia in the cargo holds of foreign ships. Next Perry spent six months at the Walter and Eliza Hall Institute where she studied mosquitoes during the Murray Valley Encephalitis outbreak. Once that tenure was completed she joined the Victorian Fisheries and Game Department as a trout biologist (1951-1954). There she was involved in field work and the analysis of trout guts and scales. Finally in December 1954 Perry found permanent employment with the Commonwealth Health Department's Plant Quarantine Division where she was once again employed in the study of Sirex woodwasps. Much of her work was carried out at the Llanherne pine plantation near Hobart, Tasmania.

Nancye Perry's career at the Commonwealth Health Department was short lived as she had to resign in 1957 after marrying. Not wanting to be idle, she engaged in many part-time jobs including demonstrating zoology at the University of Melbourne, carrying out surveys and Census collection. In 1959 Perry became interested, and highly skilled, in dog training and later volunteered for around six years with Guide Dogs Victoria, chiefly in the puppy training scheme. In 1968 she turned her attention to art and took up panting classes. Perry became competent in both oil and watercolours and had her work exhibited on many occasions. She was a member of the Victorian Artist's Society.

Edited from a 2001 biosketch supplied by Nancye Perry 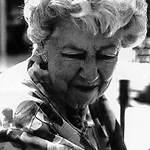