Alexander Nicholson was one of Australia's top Entomologists and greatly increased the knowledge and study of Zoology and Entomology in Australia. His longest serving position was as Chief of the Division of Economic Entomology at CSIR (Council for Scientific and Industrial Research)/CSIRO (Commonwealth Scientific and Industrial Research Organisation) from 1936 to 1960. During this time Nicholson improved the Division's reputation and research scope to include biological control, taxonomy, ecology, physiology, biochemistry and toxicology. Nicholson's main area of expertise was in insect population dynamics and biology, but he was also a fine designer of scientific equipment and a fastidious organiser. He was a member and office bearer of many of Australia's and Britain's top scientific bodies and published widely. He received many accolades for his tireless work including an appointment to Commander of the Order of the British Empire (CBE). 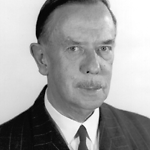