William Hayes established the research field of bacterial genetics, when he discovered the processes of genetic transfer during cell reproduction. Much of his early work was carried out in Great Britain, but from 1974 he migrated to Australia to continue his research. Hayes was appointed Professor (1974), then Emeritus Professor (1979) of the Genetics Department at the Australian National University in Canberra. He retired from all teaching and research duties in 1985 at the age of seventy-two. 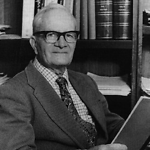