Augustus Gregory was one of Australia's most accomplished explorers. As a surveyor for the Western Australian Government he made a succession of expeditions in Western Australia searching for grazing lands and minerals, including major trips to the Irwin River (1846) and the Gascoigne River (1848). He was often accompanied by his brothers Francis and Henry, also surveyors. Gregory was leader of the North Australian Exploring Expedition (1855 - 1856), an expedition notable for the thousands of miles successfully traversed, the significant scientific discoveries, and the fact that all expedition members returned safely. In 1857 Gregory was engaged by the New South Wales Government to search for traces of Ludwig Leichhardt, departing in March 1858 and, having found some traces of the lost explorer, reaching Adelaide in July. His last major expedition was to survey the southern border of Queensland. In 1859 Gregory moved to Queensland where he was employed as Commissioner for Crown Lands and Surveyor General, and for over 20 years was a member of the Queensland Parliament. He was active in local scientific circles, serving two terms as President of the Royal Society of Queensland. 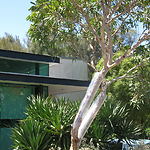 Title
Eucalyptus gregoriensis N.G.Walsh & Albr. (1998)
Type
Image
Date
23 January 2013
Place
Royal Botanic Gardens Melbourne
Note
The name of this eucalypt refers to the Gregory National Park in the Northern Territory. Neville Walsh and David Albrecht, the authors who named the tree in 1998, also commemorate A.C. Gregory who was the first European to explore the area in 1855-1856.