He served well his company, his profession and the community at large in a quiet efficient manner which earned the respect and affection of us all. Len Weickhardt, FRACI, 1991. 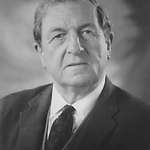