Colin Donald was Professor of Agronomy at the Waite Agricultural Research Institute, University of Adelaide 1954-1973. Earlier he had been the Assistant Chief of the CSIR/O Division of Plant Industry 1934-1954. He profoundly influenced pasture development in Australia by understanding the limitations to pasture growth imposed by soils and environment, and advanced our understanding of competition between plants when grown in communities. Donald is commemorated by the C.M. Donald Medal established in 1984 by the Australian Society of Agronomy. 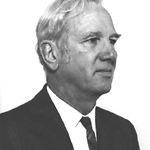