Lionel Bull was Chief, Division of Animal Health and Nutrition, CSIR/O 1935-1954. In 1937 he conducted field trials to determine whether the myxoma virus could be used to control the rabbit plague in Australia. Forced by quarantine authorities to make his observations in unsuitable environments, away from mosquito breeding sites, he concluded in 1944 that the virus was ineffective. 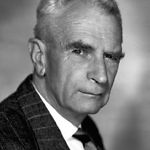