Use Trove to find more resources by/about this Corporate entry

The International Antarctic Analysis Centre (IAAC) was established in Melbourne in 1959 as an international enterprise, staffed by meteorologists from a number of countries, at the invitation of the Special Committee on Antarctic Research (SCAR). Its aims were: to develop scientific analytical techniques; to produce regular synoptic analyses for the surface and the upper air for the Antarctic and adjacent regions; to make these analyses available for operational purposes and research in related sciences; and, to investigate problems of Antarctic meteorology. It achieved substantial improvements in the quality and operational viability of circumpolar southern hemisphere analysis. The IAAC was led by H.R. Phillpot, Commonwealth Bureau of Meteorology. 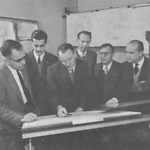 Title
The Meteorologists of the IAAC, May 1962
Type
Image