Augustus de Candolle was a Swiss botanist and Professor of Botany at Montpellier, France. He may also have held the Chair of Botany at Geneva, a position his son later held as well. Candolle wrote several important botanical works. Of interest to Australian botany is his Memoire sur la famille des Myrtacees, published posthumously in 1842. De Candolle named about 20 species of eucalypts and was the author of the genus Angophora. His name is commemorated in the genus Candollea, Stylidiaceae, which contains upwards of 100 Australian, New Zealand and eastern Asiatic species. 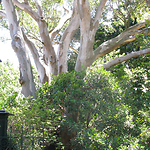