Patricia Violet (Pat) Slater gained her General Nursing Certificate at the Royal Children's Hospital and the Alfred Hospital, Victoria. She went on to train in both midwifery and infant welfare. After working and studying in several counties, including the USA and UK, Slater became a leader in nurse education. She played a role in the progression towards tertiary-based nurse education.

Patricia Violet Slater moved with her family from Melbourne to Geelong in the 1920s. Pat was sent to school at the Hermitage in 1926. She left the school in 1936 and commenced her basic nurse education at the Royal Children's Hospital in 1937. She was awarded the second prize of the Dr Jeffreys Wood Prize at the Royal Children's Hospital for academic excellence. A required component of adult nursing education was undertaken at the Alfred Hospital. After completing her basic education, Pat undertook midwifery training at the Royal Women's Hospital, Melbourne, and Infant Welfare training at Karitane Home for Mother's and Babies, Sydney. From 1943-1947 Pat served in the Australian Army Nursing Service in Australia and in Borneo. The years from 1947 to 1952 were spent travelling and working in Victoria, the Northern Territory, Western Australia and in Queensland.

She travelled and worked in the UK and Europe from 1952 to 1955, returning to Australia in 1955 to take up her first teaching appointment at the Royal Melbourne Hospital, District School of Nursing. She completed a Diploma in Nurse Education, with the aid of a Florence Nightingale Scholarship, the first of many post basic qualifications she was to gain.

From 1961-1965 Pat was a consultant for the Florence Nightingale Committee and the Victorian Nursing Council, working on issues related to the future of nurse education in Australia. At the same time she was a part time, later full time, lecturer in the College of Nursing, Australia's post basic education program. She was appointed director of the College in 1965 and oversaw the development of the new College building that replaced the mansion on the site of 431 St Kilda Road, Melbourne. The new building was opened in 1970 and was later sold when the College moved to the ACT in 1994.

In the position of director of the College, Pat was well placed to bring about the changes in education that she saw as essential for the future of the nursing profession. In 1974 she implemented the first undergraduate college-based nursing course in Australia, ten years before it became government policy to move all undergraduate nurse education to the tertiary sector. She is recognised for her pioneering efforts in the transformation of nurse preparation. This was achieved by refocusing nurse education on the sound educational principles that were lacking in the traditional service/apprenticeship style of training that had existed in Australia for over a century. Her citation for honorary fellowship of the Royal College of Nursing, Australia, sums up the qualities characteristic of her leadership. Patricia Violet Slater has had a profound and lasting influence in the qualitative improvement of nursing education in Australia. Her enthusiasm, vision, tenacity of purpose, courage and insight ensure her place amongst the distinguished nurses of Australia.

Pat Slater retired in 1983 and turned her attention to ethics, writing a number of papers before her untimely death, in August 1990. A mark of the high regard in which she was held by many, especially in education matters, was the renaming of Arthur Street, the street in which the College stood, to Slater Street in March 1984. 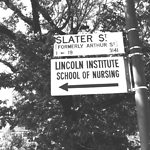 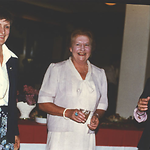 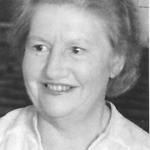