Annie Moriah Sage's distinguished military nursing career in the Second World War included the introduction of the Australian Army Medical Women's Service Training Scheme and she was closely involved in the planning and establishment of the Royal Australian Army Nursing Corps as an integral part of the Australian Regular Army and the Citizen Military Forces. After the war she took an active and leading role in the establishment of the War Nurses Memorial Centre and the Centaur War Nurses Fund. Through her work with the (Royal) College of Nursing she made a very important contribution to postgraduate nursing education. She was also active in the negotiations that brought about the 1958 Nurses' Act which gave wider power to the registering authority, the Victorian Nursing Council.

1951
Award - Commander of the Order of the British Empire (CBE) 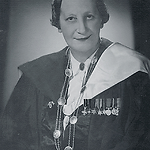