Leonard Dwyer was Director, Bureau of Meteorology, 1955-1962. He joined the Bureau in September 1937 as a meteorological assistant and soon became a trainee meteorologist. By 1940 he headed the Bureau's Training Section and subsequently became responsible for the RAAF Mobile Meteorological Flights during World War II. After the war, he worked in the Aviation Section of the Bureau's Central Office before being recruited to the position of Chief Clerk. An aggressive personality with a flair for management, he presided over a period of rapid technological progress, and improvement and extension of Bureau services. He obtained a BSc from the University of Melbourne. Dwyer served as President of WMO Regional Association V from 1957 until 1962. He died in office in May 1962. A Hundred Years of Science and Service, Bureau of Meteorology, 2001. 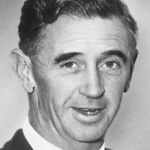