Ralph de la Lande worked for the Department of Civil Aviation (DCA) 1950-1961 in Indonesia as a Colombo plan expert 1961-1963 and in 1964-1966 as DCA's coordinating engineer for the New Melbourne Airport (Tullamarine) project. In 1967 he joined the Bureau of Meteorology and from 1979 to 1982 was acting head of the Bureau's Facilities Branch. From 1982 to 1986 he worked as an advisor to Saudi Arabia's Meteorological and Environmental Protection Administration. He retired in 1987.

He joined the Department of Civil Aviation (DCA) in 1950 and from 1950 to 1952 worked on the adaptation of wartime radars for civil aviation and meteorological purposes. In late 1952 de la Lande was appointed sectional airways engineer, with direct responsibility to DCA's chief airways engineer David Medley, for the implementation of an infrastructure program in the Northern Territory to replace the immediate post war ad hoc facilities. This program was later extended to other states. Facilities provided included radio communications (including major international transmitting and receiving stations in Darwin) radio navigation aids, instrument landing systems, runway lighting, air traffic control facilities and emergency power. Worked as senior airways engineer in DCA's Victoria-Tasmania Region, 1958-1961.

From 1961 to 1963, he worked in Indonesia as resident supervising engineer on a major new Colombo Plan Aid project for civil aviation to link all nine major centres in Indonesia with high frequency speech and teletype links (and links to Sydney and Singapore). During this period all 18 station sites were selected and planned and field works commenced. The project involved the supply of Australian communications equipment then worth £2 million.

In 1964 de la Lande resumed duty with the Victoria-Tasmania region as DCA's coordinating engineer for the new Melbourne Airport Project (Tullamarine). The job involved technical and program co-ordination planning for the complex of radio, electronic, electrical and mechanical sub projects involved and their interfacing with major civil and building works. Newly available computer based project management technology was exploited to effectively schedule and review the 300 activities (sub projects) involved. This included work scheduling for some 12 staff categories taking into account availability numbers (i.e. resource limits) - believed to be a first in Australia.

He joined the Bureau of Meteorology in 1967 as supervising engineer responsible for instrumentation engineering development covering the Bureau's observational instrumentation network, which included facilities such as radars, automatic weather stations, radiosondes and flood warning systems. Developments included a major expansion in the Bureau's remote uninhabited island automatic weather station network from 2 to 16 and a major upgrading and expansion in radar and other facilities. In 1975, following promotion to superintending engineer heading the engineering branch, additional facilities included communication facilities such as facsimile networks and meteorological satellite reception. Initiatives included interrogatible automatic weather stations to provide observations via the public telex network and the development of an Australian drifting ocean buoy equipped to exploit new technology, which enabled the reporting of meteorological observations and buoy location via orbiting satellites.

The latter development enabled Australia to participate actively with 50 Australian buoys in a 300 buoy southern hemisphere network of drifting buoys which formed a major part of WMO's 1979 Global Weather Experiment. de la Lande was the Bureau's project leader and Australian representative on the WMO committee which planned and co-ordinated its implementation and operation.

From 1979 to 1982 he was acting Head of the Bureau's Facilities Branch responsible to the Director of Meteorology for the provision of all facilities and services necessary for the acquisition and exchange of meteorological observational data and the dissemination of processed data and for associated international collaboration in the development of standards and practices.

In 1982-1986 de la Lande was detached to join the initial Australian Overseas Project Commission's team of advisers to Saudi Arabia's Meteorological and Environmental Protection Administration (MEPA). His work included the development of a strategy to combat major oil spills arising from the Iran-Iraq war and the feasibility of a corporate airship.

Following retirement (1987) he served as councillor and member of the executive committee of the Graduate Union of the University of Melbourne. 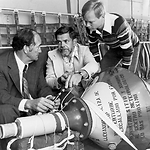