Sir Ian Potter was a stockbroker and financier who was the Principal Partner in Ian Potter & Co. 1935-1967. In 1964 he established the Ian Potter Foundation which distributes over $2million in grants each year. Beneficiaries have included the Howard Florey Institute of Experimental Physiology and Medicine, The Australian Academy of Science, CSIRO, the Zoological Board of Victoria, the Royal Botanic Gardens, Sydney, Birds Australia (formerly The Royal Australasian Ornithologists Union) and a number of medical institutions. 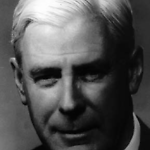