Sir William Stawell was Chief Justice of Victoria from 1857 to 1886, having earlier been a member of parliament, and Attorney-General for the Victorian Government from 1851 to 1857. In that role he did much of the work in setting up Victoria's administration, public service and governmental machinery, including the court system and the drafting of the Constitution Bill of 1854. He took an active part in the intellectual life of the colony, being a foundation member of the University of Melbourne Council, President of the Philosophical Institute of Victoria, and Chairman of the Exploration Committee which organised the Victorian Exploring Expedition. 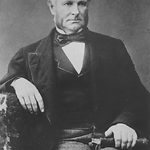