David Thomas spent most of his working life with the Mines Department of Victoria, retiring as Director of the Geological Survey of Victoria in 1967. He wrote a number of papers on mineral occurrences in Victoria and also a general account of the mineral deposits of the State in relation to its geological history and structure. 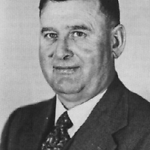