Bede Morris was a professor in the Department of Immunology at the John Curtin School of Medical Research at the Australian National University 1970-1988. He graduated in veterinary science at the University of Sydney and pioneered the use of sheep and cattle as experimental animals. Morris was internationally recognised for his research on the functioning of the lymphatic system, and the immune system in particular. His work included the role of lymphocytes in development of immunity in reproduction and foetal development, and contributed to understanding lipid metabolism, endocrinology and organ transplantation. Morris served as Chairman of the Reserve Bank's Rural Credits Development Fund and as member of Council and Vice-President of the Australian Academy of Science. He was awarded both. the Chevalier dans l'Ordre National du Mérite and the Légion d'Honneur by the Government of France. 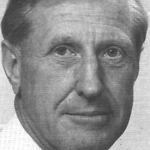