John Lovering was Professor of Geology at the University of Melbourne from 1969 to 1987 and Vice-Chancellor of Flinders University (South Australia) from 1987 to 1995. He has been involved in a phenomenal number of scientific and environmental organizations and has held many highly respected positions. His expertise and advice has been widely sort across the world. 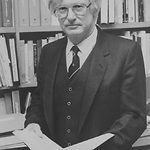