John Zillman was Director of the Commonwealth Bureau of Meteorology from 1978. He joined the Bureau of Meteorology in 1957 initially as a cadet meteorologist in Brisbane. Zillman then served as a forecaster in the Sydney and Brisbane regional offices, before moving to Melbourne in 1966. He coordinated Australia's participation in the 1979 Global Weather Experiment and negotiated the strengthening of the research role of the Bureau in the early 1980s. He was First Vice President of the World Meteorological Organization from 1987 to 1995, and has been its President from 1995. 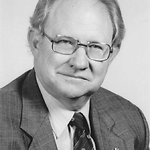