Robert Whelan was professor and head of the Department of Human Physiology and Pharmacology, University of Adelaide 1958-1971 and Vice-Chancellor of the University of Western Australia 1971-1977. His special interest was the action of humoral agents and drugs on human blood vessels. 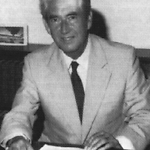