Leslie Martin was Lecturer and Associate Professor in Natural Philosophy, and then Professor of Physics at the University of Melbourne (1927-1959). Some of his many other posts include Commissioner of the Australian Atomic Energy Commission (1958-1968) and Professor of Physics at the Royal Military College of Duntroon (1967-1970). In 1971 the College established the Sir Leslie Martin Prize which has been awarded every year since then 1985, and from then at the Australian Defence Force Academy (ADFA) since 1986 to the present. The prize is awarded for 'distinguished performance by a First Year Officer Cadet in First Year Physics' from all streams, that is, all Physics, Engineering and Arts students who take Physics I. Martin was knighted in 1957 to honour his outstanding contributions to science. 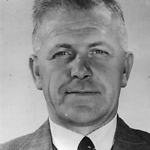