John Madsen was Lecturer in Physics, University of Adelaide 1901-1909 and Associate Professor and Professor of Electrical Engineering, University of Sydney 1909-1949. He was Chairman of the Radio Research Board (1926-1957) and a great many other bodies and boards including the National Association of Testing Authorities. Madsen is featured on the ATERB Medal, which is awarded under the auspices of the Australian Academy of Technological Sciences and Engineering. ATERB (Australian Telecommunications & Electronics Research Board) was formerly the Radio Research Board, of which Madsen was founding chairman. 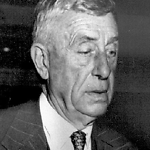