White was one of the most influential men in Australian science during and after the Second World War. At 39 he resigned from his chair of physics at Canterbury College, University of New Zealand, to join the Council for Scientific and Industrial Research (CSIR) in Australia of which he subsequently became Chief Executive Officer. 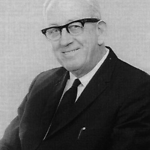